CORINA, CORINA WHERE YOU BEEN SO LONG? 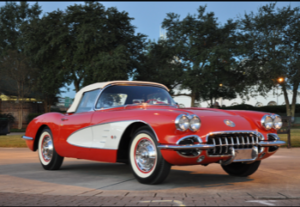 Our car, “Corina”, as we affectionately call her, was born in January of 1959 in St. Louis, Missouri. She was one of 9,760 built and one of 805 built with her options.  Her first home was in Albany, Georgia at Wallace Chevrolet and her base cost new was $3,875! With her options, she sold for $4,568.65! Wow! She spent most of her life in Albany until she was purchased by an engineering professor at Auburn University in 1994 where she received her first restoration at 55,300 original miles.

She retains all of her original, numbers-matching components as shipped from the manufacturer, which was documented by National Corvette Restorers Society Judges at the Calloway Gardens Southeast Regional Competition, where she was awarded the prestigious “Top Flight” award for excellence in restoration and preservation. After that she was warehoused and rarely driven. Due to the professor’s failing health, he decided to liquidate his car collection and we were able to purchase Corina. Needless to say, after sitting 20+ years in less than optimal storage, she required substantial refreshing to return her to her glory days.

Since I have owned her, she has been re-painted; her interior and top have been replaced; she has had a complete mechanical over-haul and countless hours of detailing to prepare her for the national show circuit again. 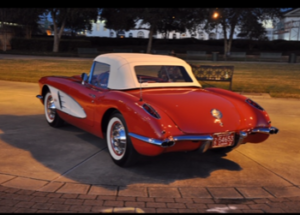 Her second coming out began with her first AACA event, the 2018 Winter Nationals Meet here in Mobile, Alabama, where she won her First Junior award. In the same year, as we were contemplating which event for her next award, we received notice from AACA that she had been nominated for a National Award. We were pleasantly surprised and thrilled, so we traveled to Philadelphia in February of 2019, where she received national recognition by way of the 2018 National Corvette Award signifying her status as best Corvette shown in AACA in the 2018 calendar year.

So from April of 2018 until June 2019, in a span of 14 months, she has received 4 AACA awards. It has been a whirlwind journey and we hope that sometime soon we’ll be able to sit back in our easy chairs and reflect on all that has happened. But we don’t have time for that now. We’ve got prepare for the Fall Nationals in October. 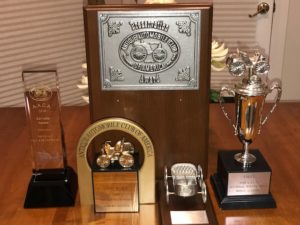 Our many thanks go out to the numerous AACA and Deep South Region members who have been instrumental in inspiration, encouragement and help along the way!