December 23, 2016   Rain and mist moved into the area just an hour before time to leave. The skys cleared and we all got in our cars and headed to the parade staging at the Civic Center.  There we were loaded with the throws for the parade. We moved out to the street about a half hour before the parade start time.  Several of the riders had not shown up yet. At parade time three passengers of vehicles had not made it to the start so Linda, Teddy and I all jump into the back of cars and headed down the parade route throwing out the throws.

December 15, 2016   Morgan was our tour guide and we had the privilege of having Joachim on the tour as well.  The two did an awesome job answering all our questions.  We spent a significant amount of time in the Final Assembly Line Hanger.  This is where the planes are pieced together before going to the paint shop.  We were told about all the aspects of putting the planes together.  We were allowed to peek into the Final phase in the flight Line Hanger.

December 10, 2016   Paul Collier lead us to the parade sight in the 1937 Cadillac.  With each driver having their own throws this was going to be a fun parade.
There were many people lining the streets waiting to catch the throws and to see Santa. One by one the cars left the staging field and drove down the streets.  During the parade Darrin got a phone call that the Bel Air had quit running.  Darrin jumped out and I took over driving the 1960 Buick  Electra. Darrin ran up to the Bel Air and figured out what was wrong.  Looking up the street he saw a parts store and ran to get a new battery.  Mean while County Commissioner Jerry Carl got to watch the parade go by.
Darrin fixed the car and had it back in the parade in no time. There were so many people lining the streets that we ran out of throws before the end of the parade.
The parade was fun, but showing off the old cars was the real thrill.  Seeing the faces of the children and grown ups as the looked at the cars was awesome.

December 3, 2016   The best way to cap off a cold day is to ride in a convertible in a Christmas parade.  That is exactly what we did. Meeting at the car warehouse at 5:30 pm we drove down Highway 90 to Grand Bay.  Darrin had the most excitement because he had the Fire Chief in his car.  During the parade there was a house fire and the Chief directed his troops from the back of the Mustang.  At the end of the parade the chief jumped onto one of the fire trucks and headed out to the fire.

December 3, 2016   The South West Mobile County Chamber of Commerce’s annual Christmas Parade was held on December 3 at 10 am in Tilman’s Corner.   The Henderson’s provided 10 cars for the parade.    The 1937 Caddy lead the pack of cars and the rest of the parade.  There were so many people lining the streets as the parade went down Three Notch Road and down Government before returning to the school.

November 17, 2016  We held our annual Thanksgiving dinner at the Club house. We had a great time just hanging out and having a meal together. 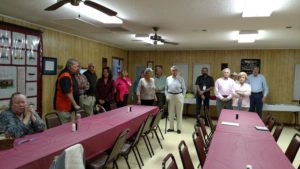 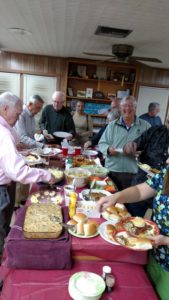 Dinner Under the Cars

February 25   Our annual Soup and Chilli Supper was held this year at the Henderson Museum. There was a great turn out and many visitors in attendance. Nothing gets you in the mood
to discuss cars better than sitting among a collection of cars. After the supper we had our February meeting. e had the opportunity to discuss our Mother’s Day Car Show. We also talked about the plans for our car club for the year in hopes to get more visibility in the community.

Saturday, February 13, 2016   What Are You Gong to do in the Wintertime? Even down here in the south winter time activities really fall off.  While we seldom have snow and ice the weather is not consistently warm enough to allow for our usual car shows, cruise nights and tours. So, what should we do in the winter? That question came up at a recent club meeting of the Picayune, MS Boulevard Cruisers. After a discussion it was decided we should try to visit a car collection or other hobby related location. This would be something we could do on a nice day driving our collector cars or change over to our newer vehicles if the weather was not agreeable. With a few phone calls to some nice folks we were invited to visit the Jim Henderson Collection in Mobile with assistance from the Deep South Region. So, problem solved.
The chosen day was Saturday, February 13, 2016, which turned out to be a beautiful day. The Boulevard Cruisers departed from Picayune at 8:30 AM, drove down to Interstate 10 and headed east. We picked up several vehicles that were awaiting us along designated spots and then stopped at a rest area east of Biloxi. Here we were met by members of the Mississippi Coast Mustang Club who joined our caravan. We again headed east and arrived at Henderson’s Museum in Mobile at 10:30AM.
At Henderson’s we were welcomed by Deep South Region members and the museum staff along with refreshments. Jim was not there at the time of our arrival but came in a little later from a cement pouring project. The tour group spread out throughout the buildings. Much has been added since our last visit and no one was disappointed. After an hour and a half of looking, visiting, commenting, questioning, etc. it was time to move on. The tour group then split up, some going to Dick Russell’s for Barbeque and others going elsewhere for lunch. Everyone made their own arrangements for traveling home, in small groups or singly as per their choosing.
It was a great day for driving and all had a wonderful time at the Museum. A big thank you to Jim Henderson and the Deep South Region.
Ardie and Charlie Froehlich, the Boulevard Cruisers and the Mustang Club.