Hosted by Jim Henderson at his museum, with celebration of John Pendergrass’s 90th Birthday 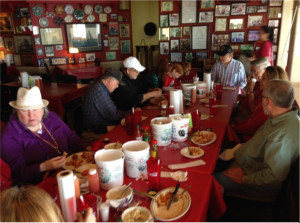 We meet at Ed’s Seafood Restaurant at 11 a.m. and had lunch before traveling to Westminster Village for their Annual Mardi Gras Parade.

There was a good turn out from the Club. Two Cars had ties with Westminster, a 1970 Malibu Convertible & Ross’s Mustang Convertible. The previous owners of these vehicles both lived at the facility. We all had a great time as did the folks who were waiting for the throws. A very good time overall.